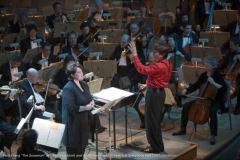 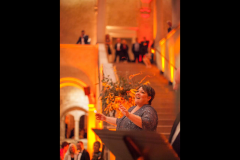 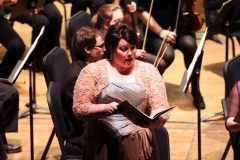 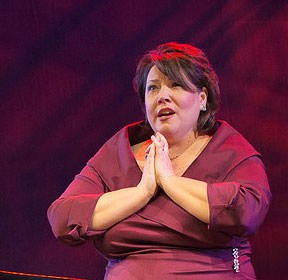 “…but the star of this show will undoubtedly be special guest soloist Jane Shivick, renowned for her arresting soprano delivery as one of the region’s finest songstresses.” – The Worcester Sun, “A Tribute to Mario Lanza,” with Talents of the World, Inc.

“I am thrilled with my choice! @BenFolds killed it, and @JaneShivick moved the entire hall to stunned admiration!” – C. Loveland via Twitter, Boston Pops performance at Symphony Hall, Gorecki “Sorrowful Songs”

“Following intermission, soprano Jane Shivick strode to center stage and delivered a powerhouse performance from Brahms, a piece which includes and opening line in German translated to, “You are sad now.” An eager crowd lost the title in the translation, offering a raucous applause for Shivick’s talents.” – Charlie Peters, The Enterprise, Brahms “Requiem”

“Soprano Jane Shivick packed many of those same qualities into her readings of songs by Rachmaninoff, Brahms, and Richard Strauss. She has a huge range, as was demonstrated rather explosively in Rachmaninoff’s “Zdes khorosho” and “Ya zhdu tebya,” and a pleasing variety of dark shades in her tone (nicely displayed in a pair of Brahms duets with baritone Ron Williams). To my ears, though, she was at her best in her closing trio of Strauss lieder, especially “Allerseelen” and “Zueignung,” which allowed her to fully channel the lyrical and dramatic sides of her musical personality.”
– Worcester Telegram & Gazette,  A Worcester Schubertiade Concert

“As Ariadne, Jane Shivick displayed a powerful instrument that was
almost too big for the tiny theater. Her best moment was the low note (“Totenreich!”) in “Es gibt ein reich,” though she sang majestically in the final scene with Bacchus.”
Paul Pelkonen, Super Conductor Blog, “Ariadne auf Naxos”

“Jane is a well known soprano whose credits are too numerous to mention. Whether Schubert, Strauss, Schumann or Sondheim, Jane’s voice filled the hall, no matter what she sang. It is an understatement to say that the evening was a success. The audience would not let them go without an encore.”
– The Sturbridge Times, Solo Recital

“The other source of entertainment was the appearance of a radiant Jane Shivick, who sang a stunning account of “Vissi d’Arte” from Puccini’s Tosca. The emotional intensity and polished delivery of her performance drew a well-deserved ovation from the audience.”
– Worcester Telegram & Gazette, “Die Fledermaus”

“…sopranos Jane Shivick and Gale Fuller were all in superb voice, churning through the quartet and playing off and against the powerful and articulate New World Chorale.”
– Worcester Telegram & Gazette, Beethoven “Symphony No. 9”

“When Michelangelo yearns to be an artist, his muse appears in the form of soprano Jane Shivick to sing perhaps the finest song in the show, the touching “Deep in Your Heart.” But there are a handful of other songs that stand out, such as the lovely “Pie Jesu” Shivick sings in the second act.
– The Providence Journal, “Michelangelo”

“Shivick’s slightly exotic-toned soprano sounded lovely in an aria from Massenet’s “Herodiade.”  But she particularly impressed with her remarkably subtle delivery of the famous “Un bel di” from Puccini’s “Madame Butterfly.”
– The Boston Herald, Summer Concert on the Esplanade (Hatch Shell)

“Standing out among the vocal soloists in the Schubert was soprano Jane Shivick, a winner of the Metropolitan Auditions.  She has a big voice that’s a little steely, which sometimes made for a top-heavy quartet.  But Shivick proved that she also has a velvety side, and that she’s always right on target.”
– The Providence Journal, Schubert’s “Mass in A flat”

“Soprano, Jane Shivick boasts a big voice with a metallic ring, bold high notes, and an ardent delivery.  She has all the goods and is on her way to great things.”
– The Boston Globe, Boston Civic Symphony Concert

“Soprano Jane Shivick has a voice evenly glamorous throughout its compass and an engaging stage presence. She can sing Fiordiligi’s “Come scoglio” from Mozart’s “Cosi fan tutte” – no mean feat.”
– The Boston Globe, Museum of Fine Arts Concert